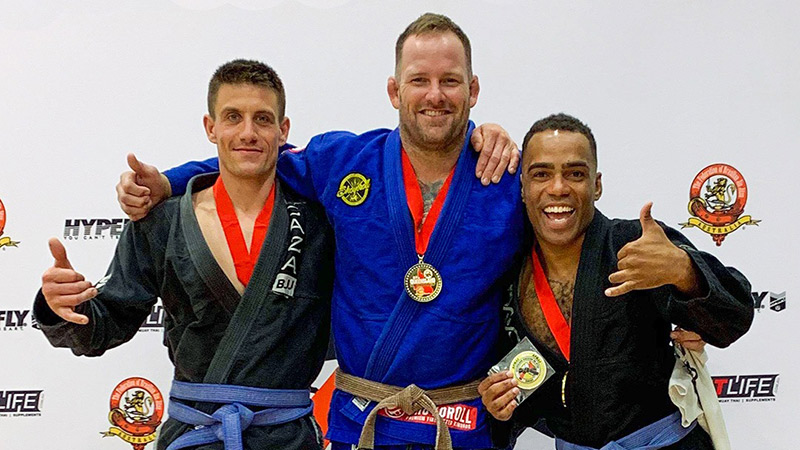 Last Sunday the CAZA comp team headed down to Carrara on the Gold Coast for the 2019 QBJJC Queensland State Championship. Due to injuries and other personal commitments, CAZA was only able to send a relatively small team. Still, the results were impressive.

CAZA finished 5th overall out of the 59 clubs that entered. Not a bad result considering that all of the big franchises were there. In total, CAZA competitors won 12 gold, 10 silver and 10 bronze medals.

In the men’s division, CAZA came 4th out of 49 teams involved in the men’s tournament. This included 7 gold, 4 silver and 5 bronze medals.

In the women’s, CAZA finished equal 13th of 22 teams. Not bad given Jemima was our only entrant. And yes, she won gold!

The CAZA kids never let us down. No matter what happens, they always carry themselves with great maturity and show us an incredible amount of skill. As a team they finished 7th out of 42 clubs, winning 3 gold, 2 silver and 3 bronze medals.

CAZA’s head coach, Yoshi, is not particularly interested in medals and points. Instead, he is more interested in seeing CAZA members improving as individuals. Good coaches concern themselves with helping each and every student develop their BJJ ability, not just their team as a whole.

Tournaments offer a great opportunity to benchmark your skills, of course, but watching your members expand upon and apply their Brazilian Jiu-Jitsu knowledge is a real point of pride for BJJ coaches. If your students improve, tournament results will look after themselves.

No matter what level of experience or rank that you carry in Brazilian Jiu-Jitsu, competing can be a nerve-wracking experience. Some handle it better than others, depending on personality type. So a big congratulations go to everyone who overcame their nerves and competed. You are better for it and you should be proud, regardless of the result.

Over the next two weekends, CAZA is celebrating two grading ceremonies – one for adults and one for the kids. This is a fun time of year for our club so make sure you are there if you are a member.

Don’t forget, our Monday morning all levels class (adults) is now part of the class timetable. Early birds can start the week of hard and fast at 6:00 am. See you there?!