Sunday 17th October was a big day for CAZA BJJ.

Despite sending a relatively small team, CAZA secured first place in the overall team rankings at the 2021 QBJJC Sunshine Coast Open on Sunday. This result included an impressive medal haul of 28 gold medals, 15 silver medals and 8 bronze medals. This was somewhat unexpected considering that many regular CAZA competitors chose not to compete at this tournament.

The overall team ranking win was thanks to some fantastic individual results that all supported the three sub-events. Results were as follows:

In total, CAZA Brazilian Jiu-Jitsu scored a total of 915 points, with the next best team scoring 753 points. 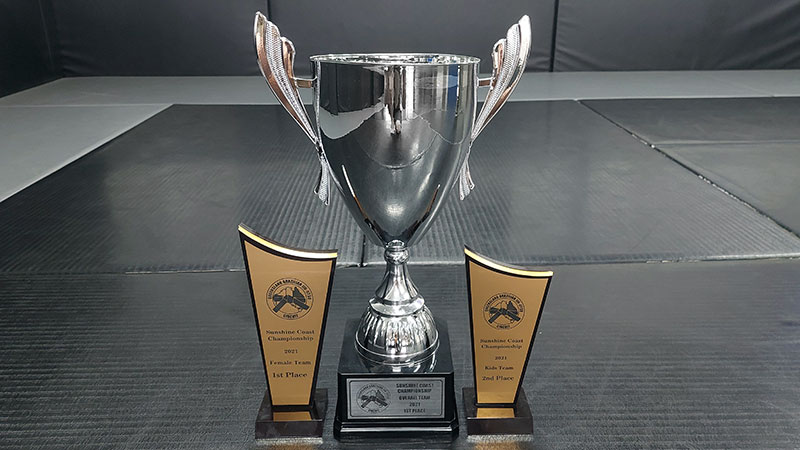 If you would like to see the individual results for our competitors, do the following:

As always, the CAZA coaches are truly proud of all of our team members and the performances they put in. It is always a challenge to overcome nerves and doubts when stepping out in front of a crowd to compete. Anyone who is willing to face that challenge and represent CAZA BJJ deserves congratulations, which the CAZA coaches offer unreservedly.

A special mention goes to Nadine Dixon after entering four events and winning gold medals in each of them! Nadine is quickly building a fearsome reputation on the competition mats here in Queensland and we can’t wait to see what she does in the future.

The rise of CAZA continues

We continue to challenge the larger, longer-established clubs as our membership numbers grow. This is the first overall ranking title we’ve won on the Queensland Brazilian Jiu-Jitsu Circuit, and yet we are still less than five years old. The future is very bright for the CAZA competition team.

As the CAZA BJJ gyms in Noosa and Bell’s Creek (Caloundra) swell their ranks, the successes will keep coming. And you can be a part of it! Talk to one of our coaches if you are interested in competing and they will ensure you are ready to go when the time comes to step out onto the mats under the CAZA banner.