CAZA BJJ At The 2018 Brisbane Championship

Get Out, Get Active With CAZA BJJ and Noosa Council 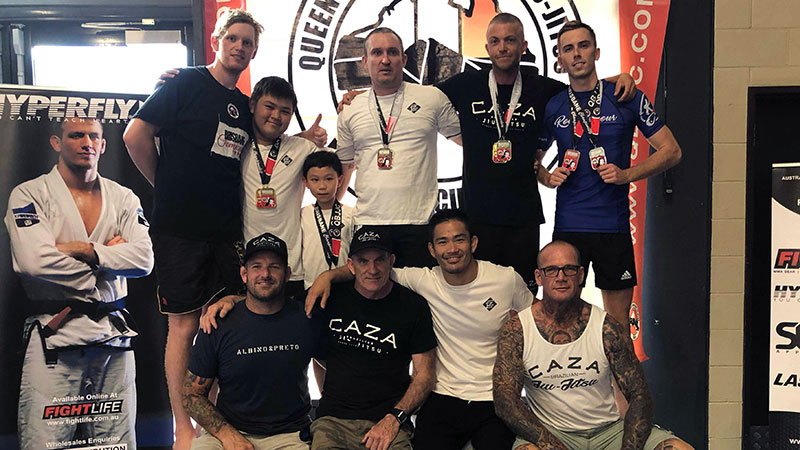 On Sunday, 18th of March, CAZA BJJ sent a small team to compete at the 2018 QBJJC Brisbane Championship. This three-star tournament was the second QBJJC event of the year. 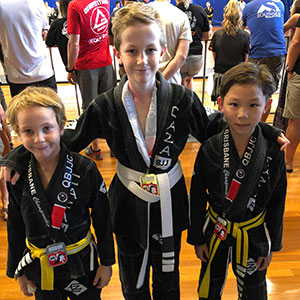 The CAZA kids team put on an impressive display in both gi and non-gi events.  The range of moves that they are willing to use and the incredibly fluid application of those moves never fails to amaze.  Not surprisingly then, they just keep on adding to their ever-growing collection of medals and season points.

The kids also displayed great humility. Two of the CAZA kids had opponents that came off a little ‘worse for wear’ during their matches (one from an armbar and the other from a choke). To the credit of our boys, they showed great concern for their opponents and acted beyond their years in consoling their injured adversaries. Well done boys, you are great representatives of CAZA Brazilian Jiu-Jitsu.

The adults did well too. Jaiden submitted one opponent in about 30 seconds with an inverted armbar, something he seems to do at least once per tournament. This was Jaiden’s first tournament at blue belt and yet he found himself up on the podium twice. Awesome result! 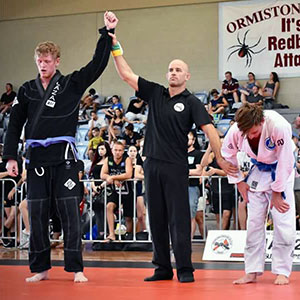 Big Sam, also in his first tournament at blue belt, had some very tough fights in gi and no-gi matches. He ground it out though and was able to come home with some more medals for his collection, something which looks like becoming a regular occurrence for the big man.

Sam has been helping Yoshi train the CAZA kids while Erik took some time off to travel. His focus and enthusiasm for BJJ has been well received by the kids and was on full display during his performances on the competition mats.

Justin was doing well and getting ahead on points in both gi and no-gi but stuck his head in a triangle (twice) and paid the price. Lesson learned (posture, posture, posture…).

If you come and watch a tournament, you will be able to make a good prediction as to what we will be learning the following Monday night. For example, the butterfly guard escape techniques we have been learning this week were being taught because of Justin’s and Sam’s mistakes at the tournament. Yoshi spots things we need to work on and by Monday night we are all doing it. 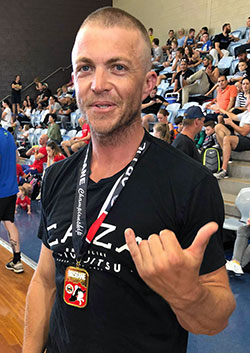 There was a funny moment during the day when BJJ tournament first-timer Shane Powell went into beast mode. Shane isn’t new to the fight game and so when he identified a random competitor as his next opponent, he began glaring at him. This was tactical brilliance, straight out of Master Sun Tzu’s ‘The Art of War‘, with the goal being to win the battle before it even begins. The only problem was, Shane was looking at the wrong man and so he was greeted by a face showing more confusion than fear. That said, one of Shane’s upcoming opponents withdrew, so maybe his stare-down had the desired effect after all.

Keep an eye out for seminar dates for Shane’s upcoming series: ‘Glaring your way to victory – the Powell method’.

A big thanks to Yoshi and Cheyne for coaching everyone on the day and for keeping everyone calm. It really does help competitors (when they can hear you). Fortunately, Yoshi’s voice is so distinct that you can’t miss it, even when rolling in a match. Meanwhile, when he isn’t coaching, Cheyne also works as the banter police at tournaments, keeping other coaches in check. All in the name of good fun, of course!

Other thanks need to be forwarded to the CAZA members who weren’t competing but went down to support the team. That goes for the parents too, who dedicate their time and money to supporting their kids’ healthy lifestyle. It’s always encouraging to see a bunch of CAZA people wearing club hats and t-shirts up at the rail cheering you on.

Next up, the South Pacific Championship. See you there!