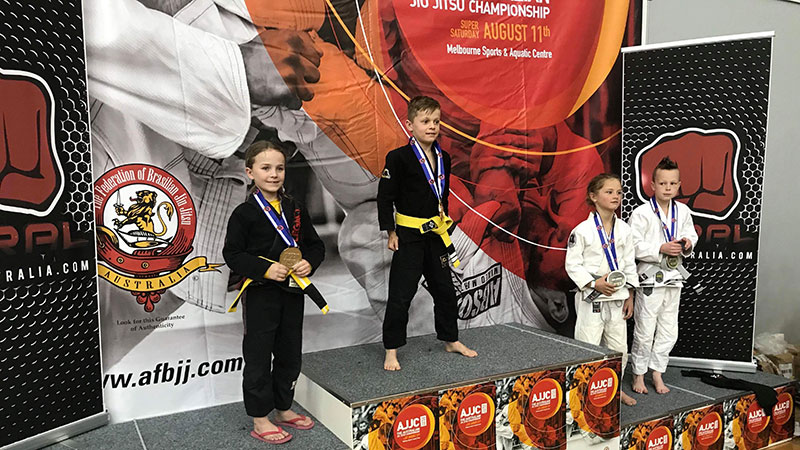 Daniel is a member of CAZA’s kid’s competition team and on Sunday 11th August 2018 he won his division at the Australian National Brazilian Jiu-jitsu Championship.

At just 8 years of age, he has already won a number of Brazilian Jiu-Jitsu titles here in Queensland and he can now boast an Australia national title having flown down to Melbourne to compete at this year’s nationals. It appears Daniel has the BJJ world at his feet.

Following in the footsteps of another young CAZA success story, Isaiah Thinee, Dan has shown what can be achieved when you approach your training with the right attitude. He listens to his coaches and takes competition seriously, all while keeping a big smile on his face.

Zuzana and Michal, Daniel’s parents, also enthusiastically support their son on his Brazilian Jiu-jitsu journey. Parents play a huge part in the sporting lives of young athletes and Zuzana and Michal do everything you could ask to give Daniel the best chance of succeeding. Hang in there guys, it will only be another 8 years before he can drive himself to training!

Yoshi, Erik and Big Sam will tell you that teaching kids can be trying at times but CAZA really does have a great bunch of kids in the gym. Watching them learn and put BJJ technique into practice is incredibly satisfying. The fact that many are also competing and regularly winning BJJ tournaments is a bonus. The CAZA BJJ coaches couldn’t be prouder.

Daniel is a prime example of someone who can put what his coaches teach him into action at the tournament level and he makes for a great role model for any kids that choose to follow his path. He is, therefore, one of two young CAZA competitors, along with Isaiah Thinee, that we are looking to raise money for so that they can compete at this year’s Pan Pacific Brazilian Jiu-Jitsu Championship. This tournament is also being held in Melbourne in late October.

CAZA head instructor Yoshi Hasegawa understands that attending interstate or international tournaments can be a financial burden for parents. So, Yoshi turned to our members for ideas. Fortunately, we have great adult members who are willing to help raise funds for the junior CAZA members. We ask that you keep an eye on the CAZA BJJ Facebook page for information on how you can take part in our fundraisers.

Let us say it again. Daniel Svoboda – remember that name. He is a future adult champion in the great sport that is Brazilian Jiu-Jitsu. Watch him grow into a sporting legend.