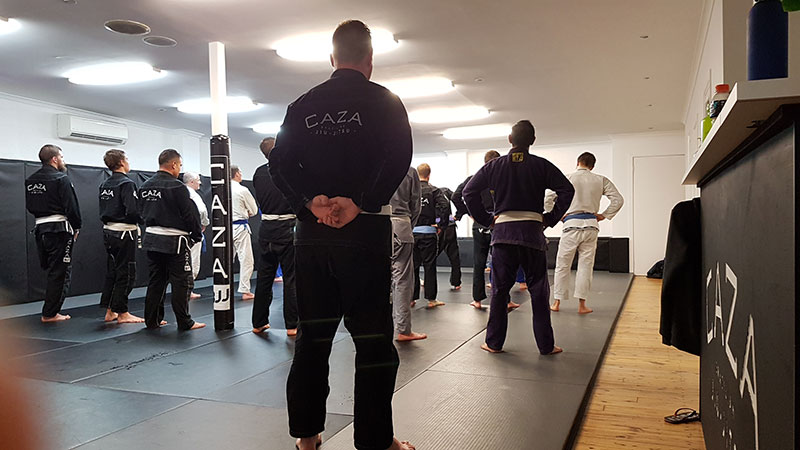 The CAZA Christmas party and final grading for 2017 will be held on Saturday, 16th of December. The grading ceremony is for CAZA members only and will start at 9.00am sharp. Yoshi believes this will take about two hours.

After the grading ceremony, we will make our way to the Noosa River for our Christmas party. Family and friends are more than welcome to join.

As Yoshi says, some students will get a stripe, some will be promoted to a new belt colour, while others will continue on at their current rank. A grading ceremony is a celebration, and members are encouraged to attend to support and congratulate those who are promoted.

As is tradition in Brazilian Jiu-Jitsu, those being promoted to a new belt colour will be thrown into the shark tank. At CAZA, this means the newly promoted members roll continuously for 30 minutes. Every two minutes the opponent changes and a fresh CAZA member jumps in to continue the roll. Thirty minutes of hard rolling without a break is very hard, especially when everyone else keeps coming in fresh.

Note that the normal class timetable will apply right up until Saturday the 23rd of December. From that date the gym is technically on a two-week break, however, please watch the CAZA Facebook page. Depending on who is available, we plan to have at least one open mat session per day, excluding Sundays.

Yoshi is also going to Japan over this period, for four weeks in total. Please come down and support the club and the higher belts who will be teaching in his place.